My Soul’s Shadow premiere at the O,Miami Poetry Festival

High-resolution photos are not available on this webpage. To access high resolution images or technical specifications for this artist send an email to: info@elsieman.org, be sure to include which artist you are interested in!

“A Decade of Puppets in Organized Chaos”

“an unclassifiable story of spectral beauty”

“I feel like I’m not doing justice to explaining how magical this all was . . . unimaginably intricate”

“. . .the boundaries between cinema and live theater, puppetry and reality”

“It’s with these simple tools – paper, plastic and light – that Chicago-based Manual Cinema, a shadow puppet company, manages to create a world that makes the absence of light look alive.”

“The troupe’s shadow puppetry ‘combines handmade shadow puppetry, cinematic motifs, and live sound manipulation to create immersive theatrical stories,’… in a style that would be familiar to devotees of early cinema.”

Leonardo! A Wonderful Show about a Terrible Monster

Leonardo is a terrible monster. He tries so hard to be scary, but he just… isn’t. Then Leonardo finds Sam, the most scaredy-cat kid in the world. Will Leonardo finally get to scare the tuna salad out of someone? Or will it be the start of an unlikely friendship? The plot thickens when this pair meets Kerry and Frankenthaler, an even scaredier-cat and her monster friend. Kerry and Sam need to make a big decision: will they just be scaredy cats or can they become friends?

Leonardo! uses hundreds of illustrated paper puppets, book pages, two-dimensional props, furry monster puppets, and songs to bring Mo Willems’ books to life. Manual Cinema wanted to re-create the experience of holding one of Mo’s book pages, which are big, bold, colorful, and full of visual rhythm, with a playful use of scale. Like all Manual Cinema productions, you’re invited to watch the big screen like a traditional movie, or to watch the artists below as they create the story in real time. (There is no wrong way to watch the show!)

Leonardo! was commissioned by The Kennedy Center and received its stage premiere in spring, 2022. It was presented at the New Victory Theater in NYC for a month in June, 2022; at the Edinburgh Fringe Festival in August, 2022; and had its home season at the Chicago Children’s Theater Sept 10 – Oct 16, 2022. 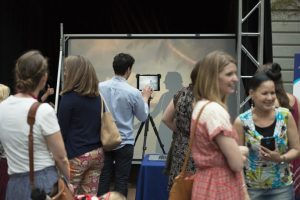 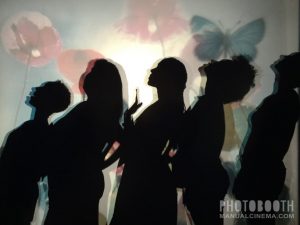 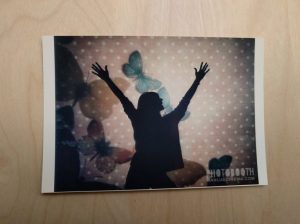 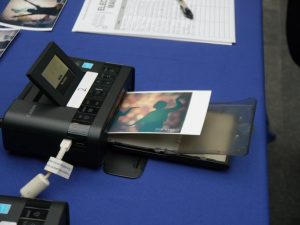 Celebrating the life and poetry of Gwendolyn Brooks (1917-2000), No Blue Memories: The Life of Gwendolyn Brooks features a screenplay by Eve L. Ewing and Nate Marshall of Crescendo Literary and with music by Jamila Woods and Ayanna Woods. The first African American to be awarded the Pulitzer Prize, and poetry consultant to the Library of Congress, Brooks was known for her poems reflecting the civil rights activism of the 1960’s. No Blue Memories is performed by Manual Cinema’s signature combination of shadow puppets, actors in silhouette, and live music. No Blue Memories was commissioned by the Poetry Foundation for the Brooks Centenary and premiered in Chicago in November, 2017.
https://www.poetryfoundation.org/poems-and-poets/poets/detail/gwendolyn-brooks

Manual Cinema worked in collaboration with the New York Times to create shadow animations and original music/ sound design for The Forger, a short film about the life and work of Adolfo Kaminsky- the famed Paris Forger that worked during WWII.

“How do you become a forger? Out of necessity and by chance,” says Adolfo Kaminsky. As a teenager, Kaminsky saved thousands of lives by forging passports to help children flee the Nazis. He spent his life helping others escape atrocities around the world.

This is the story of the secret life of Adolfo Kaminsky, a man who spent decades making fake passports so that people could cross borders and flee persecution.

The Forger has been nominated for a Peabody Award.

Love, loss, and creation merge in unexpected ways in this thrilling classic gothic tale conceived by Manual Cinema. Stories of Mary Shelley, Victor Frankenstein, and his Monster expose how the forces of family, community, and education shape personhood—or destroy it by their absence.

In a special world premiere presentation, internationally-renowned multimedia company Manual Cinema stitches together the classic story of Frankenstein with Mary Shelley’s own biography to create an unexpected story about the beauty and horror of creation. Manual Cinema’s Frankenstein combines handmade shadow puppetry, cinematic techniques, and innovative sound and music to create immersive visual stories for stage and screen.

Court Theatre presented the world premiere of Frankenstein in Chicago in November, 2018. Frankenstein had its New York premiere at The Public Theatre’s Under the Radar Festival in January 2019 and its international debut in Scotland at the Edinburgh Fringe Festival in August, 2019. It has been presented by Cal Performances, Berkeley; Chile’s Santiago a mil festival; University of Florida, Performing Arts, Gainesville; and Port Theatre, Nanaimo, CAN; among others.

Manual Cinema’s work has been featured at the Metropolitan Museum of Art (NYC) The Tehran International Puppet Festival (Iran), the Museum of Contemporary Art Chicago, the Noorderzon Festival (Netherlands), The O, Miami Poetry Festival, Handmade Worlds Puppet Festival (Minneapolis), The Screenwriters’ Colony in Nantucket, The Detroit Institute of Art, The Future of Storytelling Conference (NYC), the NYC Fringe Festival, The Poetry Foundation (Chicago), the Chicago International Music and Movies Festival, the Puppeteers of America: Puppet Festival (R)evolution, and elsewhere around the world, including various bars and found spaces around the city.

Drew Dir has worked as a puppeteer, playwright, dramaturg, and director in Chicago and London. Most recently, his short play The Lurker Radio Hour was voted Best Production at Collaboraction’s Sketchbook 8 at the Steppenwolf Garage; his Sketchbook plays have been called “daring” by the Chicago Tribune and “ballsy” by Time Out Chicago. He holds an MA in Text and Performance Studies from King’s College London and the Royal Academy of Dramatic Art. Currently, Drew is Resident Dramaturg at Court Theatre and a Lecturer in Theater and Performance Studies at the University of Chicago.

Sarah Fornace is a choreographer, performer, and narrative theorist based in Chicago. Her interests include: narrative structure, theories of time, non-verbal storytelling, spectacle, and interactions with (in)animate objects. She has choreographed fights and stunts for Depaul University, Court Theatre, Red Orchid Theatre, Steppenwolf’s Garage Rep. series, The New Colony, Adventure Stage, and elsewhere. She has performed with Redmoon, Lookingglass Theatre Company, Collaboraction, and Babes with Blades.  Sarah has been a member of Blair Thomas and Company (puppetry) and Boum Twa (ladder acrobatics). She is also a member of Cirque du Soleil’s artist database. She currently teaches movement at Columbia College Chicago.

Ben Kauffman is a multi-disciplinary artist who creates installations, interactive media, video, and participatory environments. His most recent work has been exhibited at CUNY’s Baruch College and Freshkills Park on Staten Island, and he has given talks and workshops at The Metropolitan Museum of Art, New York University, Baruch College, and Parsons The New School of Design. He is also the co-creator of the interactive web-based zine, SMOG. He holds a Master’s degree from New York University’s Interactive Telecommunications Program (ITP) and is based in Brooklyn, NY.

Julia VanArsdale Miller specializes in the tactile and movement arts. She is a director, puppeteer, and graphic designer. Manual Cinema provides her with an outlet for many artistic impulses, including but not limited to breathing life into the inanimate, making delicate small things, and telling stories without words. She holds a BFA in Theatre Arts from Boston University and has studied professionally under Teatro Punto, Familie Flöz, and Double Edge Theatre.

Kyle Vegter is a composer, producer, sound designer, and Managing Artistic Director of Manual Cinema. As a composer he’s been commissioned by such groups as TIGUE, the Chicago Composer’s Orchestra, and Homeroom Chicago. His production credits span genres, and include recent releases by Thin Hymns, Spektral Quartet, Tim Munro (of eighth blackbird), and Color Card. His past Composer/ Sound Designer credits with Manual Cinema include Lula Del Ray, Ada/ Ava, FJORDS, and various other performance and video projects. He has been an artist in residence at High Concept Laboratories, and co-founded Chicago’s only contemporary classical music cassette label Parlour Tapes+.